This guide shows how to set up your development environment to build and deploy Cordova apps for BlackBerry 10 devices. For previous versions of BlackBerry, you need to use a different set of command-line tools, described in BlackBerry Platform Guide.

The development environment is available on Windows, Mac and Linux.

Developers should use the cordova utility in conjunction with the BlackBerry Native SDK. See The Command-line Interface for information how to install cordova, add projects, then build and deploy for each platform.

The BlackBerry Native SDK is available from developer.blackberry.com. Following installation, you need to add its command-line tools to your system path.

On Mac and Linux:

Set up for Signing

If you wish to test on a device or distribute apps through BlackBerry World, your system must be setup for code signing.

To obtain a signing key, go to the BlackBerry website and make sure to retain the password you specify. Then run the blackberry-signer utility that is included with the BlackBerry Native SDK.

Detailed instuctions can be found here:

Use the cordova utility to set up a new project, as described in The Command-line Interface. For example, in a source-code directory:

If you wish to run a device emulator, download and install the BlackBerry 10 Simulator.

Before testing an app on either an emulator or a device, you need to add a target to your project. Each is identified with a unique name, and associated with an IP address. You need to get the IP address from the emulator before you use it to view apps.

Launch the emulator image, then choose Settings from the home screen:

Navigate to the Security and Privacy → Development Mode section, enable the option, and obtain the IP address: 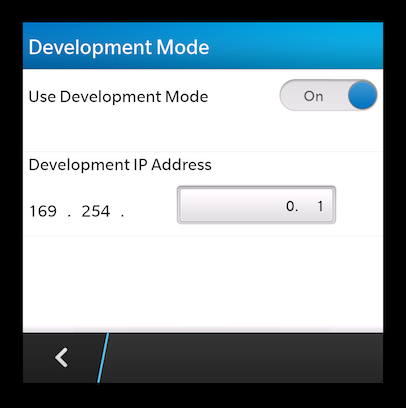 An additional set of command-line utilities are included when you set up the BlackBerry 10 platform for your project. The following command, in this case invoked from the project top-level directory, associates a target named emu with the IP address displayed above.

Then, run the emulate command to view the app:

To deploy to a device, make sure it is plugged into your computer. Enable development mode and obtain the IP address as desribed in the emulator section above. You will also need to obtain the PIN from the the Settings application under About → Hardware: 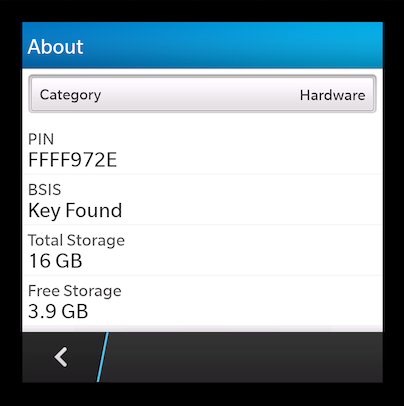 Run the target command-line utility to associate a name with an IP address, device password and PIN.

Then, run the run command to view the app:

If a debug token is not yet set up for the device, an error message prompts you to use the platform run script with the password you provided when registering for signing keys.

When debugging on the device or an emulator, you may run WebInspector remotely to view the application's internal state. A prompt displays the URL that allows you to connect to your app with a standard web browser. For more information, see Debugging using WebInspector.

By default, running the cordova build command creates an unsigned .bar package file suitable for testing on a device or simulator.

You need to run a different build command to create a release version suitable for distribution through BlackBerry World. It does not rely on the cordova CLI tool, and instead uses the following syntax: