This guide shows how to set up your SDK development environment to deploy Cordova apps for Android devices. It walks you through the process of installing the Android SDK, opening an Android project in Eclipse SDK, and deploying to an emulator or device. You will need to follow this guide to at least Install the Android SDK, regardless of which workflow you are following. (Both the Web Project Dev and Native Platform Dev workflows require the Android SDK to be installed and accessible via your PATH.)

Developers should use the cordova utility in conjunction with the Android SDK. See The Command-Line Interface for information how to install it, add projects, then build and deploy a project.

Install the Android SDK from developer.android.com/sdk. The android sdk is distributed as an 'adt-bundle-

For Cordova command-line tools to work, you need to include the SDK's tools and platform-tools directories in your PATH environment. On Mac, you can use a text editor to create or modify the ~/.bash_profile file, adding a line such as the following, depending on where the SDK installs:

This exposes SDK tools in newly opened terminal windows. Otherwise run this to make them available in the current session:

You may also need to enable Java and Ant. Open a command prompt and type java, and also type ant. Append to the PATH whichever fail to run:

Once created, you can use the Eclipse that comes along with the Android SDK to modify it:

You can use the cordova utility to run an app in an emulator, or you can run it within the SDK. Either way, the SDK must first be configured to display at least one device. To do so, use the Android SDK Manager, a Java application that runs separately from Eclipse. There are two ways to open it:

At this point you can use the cordova utility to deploy the application to the emulator from the command line:

If instead you work within Eclipse, right-click the project and choose Run As → Android Application. You may be asked to specify an AVD if none are already open. 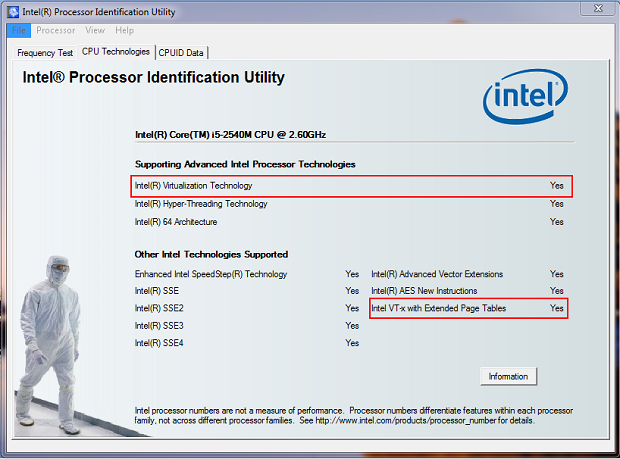 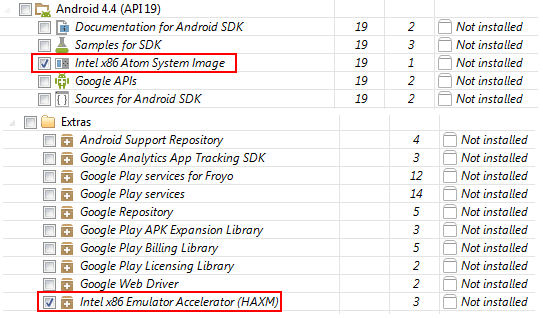 Once installed, in order to test it, create new a AVD with the CPU/ABI set to an Intel (Atom) x86 Image: 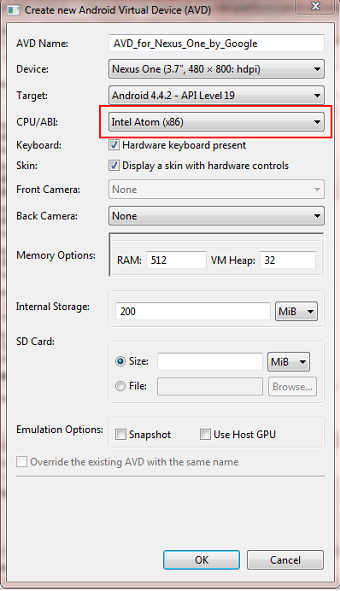 If you are using Linux-based system, follow the instructions in the Android Developer Site.

When starting the emulator, ensure there are no error messages indicating a failure to load HAXM modules.

You can push the app to the device from the command line:

Alternately within Eclipse, right-click the project and choose Run As → Android Application.